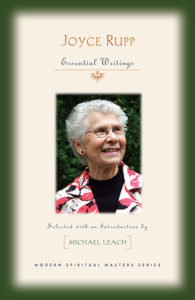 May 2, 2017—Reviewed by Carl McColman on Patheos

Orbis Books has a long-standing collection of books called the “Modern Spiritual Masters Series.” With over sixty titles to date, this series anthologizes writings from key spiritual authors of the 20th and 21st centuries, ranging from Thomas Merton to Evelyn Underhill, from Dorothy Soelle to Howard Thurman. While the featured authors are mostly Christian, other significant figures appear as well, such as Thich Nhat Hanh and the Dalai Lama. Modern Spiritual Masters Books are excellent introductions and career-spanning overviews of some of the greatest authors of our time.

New additions to this series are continually being published, and recently Orbis published two new volumes that deserve a mention here on this blog. These authors are not renowned chiefly or primarily as “contemplatives,” — nevertheless, their writing is so spiritually nourishing and grounded in a mature faith that I, for one, certainly find a clear contemplative resonance when I read their words.

I’m talking about Jesuit priest James Martin and Servants of Mary Sister Joyce Rupp. Each one now has a collection of “Essential Writings” published by Orbis, and I heartily endorse both books.

James Martin, SJ is rapidly becoming one of my favorite living Catholic authors. His writing is conversational and accessible, and luminous with his obvious love for God, for the Catholic faith, and for the rich spirituality of his Jesuit order. But he is not afraid to tackle difficult issues and has a deft ability to navigate the conflicts and challenges that face Catholicism in our time, with grace and compassion and even a dash of humor.

In our age when partisan rancor often threatens to overcome civil dialogue, Martin’s is a voice filled with reason, kindness, and moderation (in the best sense of the word). I heartily commend his work not only to Catholics, but to anyone concerned about spirituality in our time.

James Martin: Essential Writings collects a generous sampling of this Jesuit’s writing, featuring a number of articles or essays that have appeared only in magazines (Martin has been for some time now an editor for the Jesuit magazine America), making this volume a valuable addition even to libraries like mine that already include numerous titles of Martin’s.

Like many books in this series, this anthology focusses on Martin as a spiritual teacher — but good Jesuit that he is, Martin “finds God in all things,” and therefore his writing covers a wide terrain, from the overtly spiritual (the diary of a pilgrimage to Lourdes) to the surprisingly secular (his work as an “off-Broadway” theater consultant).

He doesn’t shy away from current events — or current controversies — either: the priest abuse crisis, the Obama presidency, and 9/11 all figure prominently in writings anthologized in James Martin: Essential Writings. In short, this is a wonderful introduction to Martin that showcases the continuing relevance of Jesuit spirituality for our time.

Entering religious life at 19, Rupp first was trained as a teacher but later studied theology, transpersonal and Jungian psychology, and Christian spirituality. A popular retreat leader and spiritual companion, she is the author of over twenty books, including award-winning and bestselling titles like Walk in a Relaxed Manner and The Cup of Our Life.

Her most popular book, Praying Our Goodbyes, highlights her voice as a “spiritual midwife,” a soul companion who walks with those who are grieving, ill, or near death (Rupp has worked many years as a hospice chaplain).

Her new book from Orbis gathers together both poetry and prose excerpts from her many books, topically arranged to include autobiographical reflections, celebrations of the good earth and the cosmos in which we live, and reflections on God.

Unlike James Martin, whose work I’ve been following for years now, when it comes to Joyce Rupp I’m a newbie — but this book drew me in, and I quickly found myself eager to learn more about her walk along the Camino, or her sense of God as one who seeks her out, or simply savor her poetry, rich with natural imagery and a sense of trust in the love and mercy of God.

Readers of this blog, devoted as it is to contemplation and mysticism, may wonder why I am reviewing these two particular books.

Granted, neither James Martin nor Joyce Rupp have the same kind of “mystical” reputation that writers like Cynthia Bourgeault or Richard Rohr might enjoy. But I think they are both excellent examples of what Thomas Merton called “masked contemplatives” — people who are not always quoting Teresa of Ávila or Meister Eckhart, who don’t make a big deal about spending an hour every day in silence, but who in a very humble and gentle way embody a spirituality of compassion, of earthiness, of paying attention and trusting the slow work of the Spirit, and of finding God in the ordinary moments of the days.

We need more “contemplatives” like this: and both James Martin and Joyce Rupp do a wonderful job of showing us the way.

Read the review on Patheos.