REVIEW: The Star in My Heart 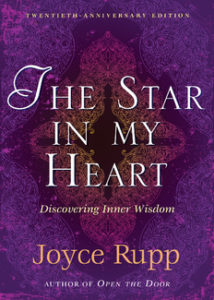 The Star in My Heart

Perhaps most difficult for her was an increasing awareness of the anti-woman stance of her own church. She admits this freely, but her emphasis is less on criticism than on the value of seeing her experience truthfully and then healing the hurts. One accepts these realities and does what one can, but always celebrates life and God’s presence in it.

To further the healing process, Rupp suggests the need to gather up and be energized by our good, “life-giving” memories, which she compares to a photo album. We should turn its pages frequently, for gratitude and celebration are at the core of a healthy spiritual life. After all, she says, the Scriptures themselves are “one big photo album” of God, beginning in stories told over generations to keep the memories alive.

The Star in My Heart appeals to readers to try walking with Sophia, showing them the need to know themselves and to be open to new directions and ideas, which are often invitations to wholeness. They will feel reassured by Rupp’s confession that she herself is frequently fearful of such challenges, hiding from the call to be her truest self even as she longs to answer it.

In Lighten Up she hears Sophia tell her to lower her expectations, not be so demanding of herself. “When did I develop the notion that I could do it all?” Slowly she becomes grateful for the insistent voice “nudging me toward the laughter of letting go and the chuckle of neglect.” But the “Divine Challenger” also reminds her that she takes the easy, familiar path all too often and urges her to take risks. “When did I give in to fear and bow to security?” Rupp wonders. And finally she asks Sophia to urge her to abandon her “stronghold,” to see that she can still “leap beyond the barriers.

Rupp is recording her own prayers; most were not ‘composed’ for the book but spring directly from her journals. In publishing this book she is giving the rest of us permission to use the daily events of our lives – no matter how small or unpleasant – as proper material for prayer. In doing so she echoes spiritual advice that has persevered over the ages. The Imitation of Christ, for example, tells us that, “If your heart is right, then every creature is a mirror of life to you and a book of holy learning, for there is no creature – no matter how tiny or how lowly – that does not reveal God’s goodness.” Encouraging us in new words and images, Joyce Rupp shows us how to make our hearts right by finding and nurturing the stars within them.